Electrical Stimulation: What Is It And How Is It Used

Electrical stimulation has been present in the rehabilitation world from as early as the 1800s. Initially used for stroke and other neuro patients who had lost the use of their limbs and muscles due to brain damage. It is still used in this field, but it has also progress into the musculoskeletal realm. At  we use a Complex 6.0 as part of our rehab progress for several different types of injures. This blog will investigate what electrical stimulation is and its different applications into the rehab world.

What Is Electrical Stimulation? 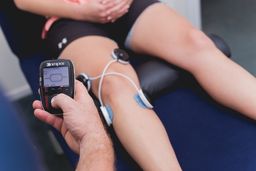 Messages in our body are transferred via electrical impulses along our nerve fibres to perform several different functions. For example, if you want to straighten your knee, an impulse will leave your brain through the nervous system to the receptors at the quadriceps muscle which will cause the muscle to contract and the knee to straighten. This is a very simplified version, but it gets the point across. Electrical stimulation works to recreate this without the input from the brain, it will create its own electrical impulse to the muscle fibres causing an involuntary contraction.

Electrical stimulation can also influence our sensory nerves to create an analgesic response. Stimulation of different types of nerves such as our tactile nerves (touch sensation) is theorised to create a pain relief type response.

Electrical stimulation is used for a wide variety of purposes, these are a few reasons we use it a Cairnhill Physiotherapy.

A patient has sustained a significant injury that has required them to completely immobilise a joint or region of their body, for example at patella dislocation patient who must wear a brace for 6 weeks. We either have the choice of waiting the 6 weeks until they are cleared from the brace resulting a large amount of muscle wasting or we can start straight away with electrical stimulation to limit their muscle atrophy. As a result, the patient has a much better starting point once they are out of the brace.

As previously mentioned, electrical stimulation can be used for pain relief. This is called transcutaneous electrical nerve stimulation (TENS). We would use TENS when a patient’s rehab is limited by pain more than any other factor and that pain is stopping them from progressing. A patient may have a flare up in their pain limiting their ability to do their rehab, by using TENS it can manage their pain and allow them to complete exercises and maintain progress.

Sometimes this must be seen or experienced to be believed. Following a major injury or surgery, a patent can struggle to actively fire their own muscles, the brain is saying squeeze or contract but nothing is happening. This neural inhibition can be a big hurdle for patients to overcome and can significantly limit progress if not addressed. Electrical stimulation can help to stimulate the muscle and build recognition between the brain and muscle activation.

Electrical stimulation has been shown to have benefits in strengthening, recovery and conditioning although it should only be one aspect of a well-rounded individualised rehabilitation program. If you are struggling to get the gains in your rehab, contact us today to see if electrical stimulation is right for you.


Alternatively, request an appointment using the form below.